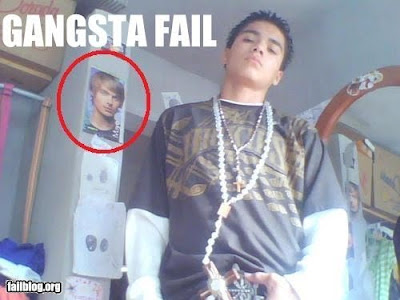 Spoiler alert: This post is going to have a healthy dose of social commentary, and will possibly offend someone. (So deal with it.)

A good friend of mine was given four front row tickets to yesterday afternoon’s Angels game. Did I want to be spontaneous (shut up! Sometimes I can be…) and take Conner and Mitch and go with her? Sure! Sounds fun!

We arrive around the 3rd inning. Yep… we are front row, just above the visitors’ dugout. Nice seats. This is pretty cool. The kids get ice cream, my friend and I got beer and peanuts. We’re having a nice time…. then we hear rowdy people to our right.

We shared the row with a collective 1,200 pounds of cholo. Five big guys, all in their 40s, each of them at least 250 pounds, (one of them close to 300 pounds) and four of them had been enjoying a lot of beer. One of them was extremely rowdy, calling out stupid remarks to the guy selling “Bags of nuts! Who needs a bag of nuts?” …. you get the idea.

Now, this shouldn’t be a problem. We’re at a major league baseball game.
People whistle.
They yell at the players.
They cheer.
They boo.
What they never should not do, is whistle like this:

You know why? Because it is obnoxious and serves no other purpose but to annoy those around you and hurt their ears.

As he repeatedly let out this, long, sustained, annoying whistle, people around him began to murmur unhappily. We began to hear “Dude! Come on!” or “Come on guy, that’s enough.”

The more RA heard complaints, the more defiant and jerky he became, loudly commenting to his seatmates that it’s a free country and he is whistling at a baseball game. He clearly was enjoying the fact he was annoying the people around him.

Then my friend, who is one of the most laid back “live and let live” people that I know, tossed a peanut in the RA’s direction. It was good natured, trying to get his attention, sort of playfully saying, “Hey, stop with the stupid whistle.”

While on any other day she may not have been able to hit the broad side of a barn, yesterday she managed to peg a 300 pound, drunk cholo in the face with a peanut.

RA was on his feet and freaking out within seconds.

And by freaking out, I mean dropping rapid fire F-Bombs and ranting about the assault against his person, while standing over Conner and Mitch. At that point, I am yelling back at him to stop with the language, because there are children present. Nothing doing. He continued to rant and rave.

Being in the first row has another advantage in that security was right there to witness everything. Mr. Security tried to get RA to calm down. RA was asked to show his ticket stub.

We, on the other end of the row, were sitting quietly… not making a scene. We were not asked to show our tickets.

Can you guess where I’m going with this?

Of the five guys, the one sitting closest to us was clearly giving off signals that he disapproved of the scene his friends were making, but that he was also odd man out and could do nothing to influence the larger group. The other four continued to loudly discuss it, complain about it and make serious efforts to intimidate us.

They were on the right-side of our row, on the aisle. We were in the middle-left of the row. When returning from a beer run, rather than going back to their seats on the right, they made sure to come in from the left and cross in front of us growling “Watch it!” as they passed.

They made sure to loudly discuss our complaints about such profanity in front of children, “When I was that age, I had already heard F*** lots of times…”

Yes, I’m sure you had, and look! You turned out OK, right? What a socially retarded ass. Of course the kids have heard that word before… but you can be damn sure they had never had a fat, drunk guy scream it at their mother and her friend.

There is real racism and injustice in the world.

Assholes like this steal away attention from real issues by creating scenes that perpetuate and enforce societal stereotypes.

Security checked your ticket stub but not ours?

People around you asked you to stop that ear piercing whistle?

People seem to treat you with disdain and a touch of fear?

The up-side to this is that we were able to talk to Conner and Mitch about it.
We were able to discuss the fact that bullies are people who have low-self esteem, who are ego-centric and narcissistic. That bullies make themselves feel better by making others feel worse, and they blame any of their shortcomings on other people or other factors. They do not take personal responsibility.

We were able to discuss that while there is real racism and injustice in the world, this was not one of those times, but rather it was a case of a 40 year old, fat guy who threw a temper tantrum.