At the beginning of August, I wrote about how I found a curbside treasure (part of a crib, and a sleigh headboard and footboard) and that I got Handsome Hubby all twisty because I was hauling home more crap.

He didn’t think I could have anything done with them by the end of August.

I assured him that I would, indeed, have something fabulous created by August 31st.

Want to see what I created…? 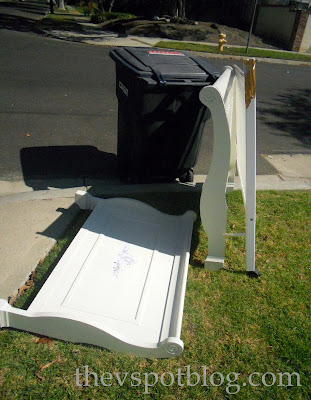 Yep. I threw in the towel, but I did create something.  I created some breathing room.

My excitement over the great lines of the headboard clouded my judgment.  I had all of the ideas that were spinning around, but no time to implement any of them.  Yesterday I found myself sitting in church,  trying to figure out how I was going to create something in these last few days of August and still take care of my other commitments, rather than fully concentrating on the message.  (I had also been thinking about how I was going to have to give HH “I told you so” rights if I couldn’t whip something up…)

Want to know what I am currently (and simultaneously) working on right now?

Also? We’ve got what everyone else has: kids going back to school, football practices, house cleaning, errand running, normal life stuff.   …But we have extra stuff that is stressful.  Devin & Conner’s dad (my ex) is terminally ill, and that needs our attention as we shepherd the boys through this increasingly difficult time.
So I had to let go of the creative ideas to turn trash into treasure… this time.  This time, he won, I lost.  But there will be a next time… there always is.
Does anyone else bite off more than they can chew and then stress out over it?
Do any of you have more ideas in your head than there is time in the day?
Ever let go of something you knew you could handle, if only the timing had been better?
Please tell me that I’m not the only one who sometimes has to acknowledge the fact that she’s not Super Woman after all…
ps: I did pry off the cool little wooden appliques that were on the bed.  I know I will be able to do something cool with that. Someday… 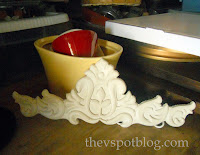 My First Pumpkin of the Season… and it’s a total Craft Fail. Happy Valentine’s Day. NOT. Keepin’ it real: My house is a freaking disaster. A “Craft Fail” and how I saved it My Prom? Just like “Carrie” but without the pig blood. A Seattle Seahawks chair make over with NFL Duck Tape.