Valentine’s Day is rapidly approaching, and I am wracking my brain to think of something sweet and meaningful for Handsome Hubby.  And it has to be better, more original and more creative than the things he does for me.  Yes, competition is one of the cornerstones of our marriage… why do you ask?

We do not go for the traditional box of chocolates and roses (although I wouldn’t turn them down)… instead, we try to “one-up” each other.  (Yes, we’re mature.)  I think his goal is to make me get all weepy and verklempt. 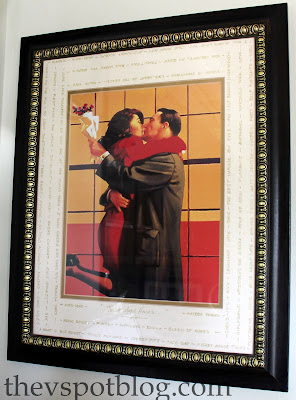 Here’s a great example of one of the things HH did for me.  (Even though it was a Christmas gift** one year, it would totally work for Valentine’s Day.)  He took an image that held significance for us and then hand-wrote a “mat” of memories, inside jokes and meaningful words all the way around it.

Here’s the brief back story: Once upon a time, before we were married, Handsome Hubby flew up from CA to visit me in WA  for a long weekend.  It was a great couple of days and I was sad to drop him off at the airport on the last morning.  We said our goodbyes and I sadly started to drive home, missing him already.  About 20 minutes after I left, he called me to say that he had made a mistake when he was booking his flight and was scheduled to leave at 9:00 pm, not 9:00 am… So we got a bonus 12 hours together.

Years later, we saw a Jack Vettriano painting called Back Where You Belong and we were both reminded of the 12 hour gift we were given.

HH took the image, cropped it so that only the two lovers are showing, and hand-wrote all that sweetness around the mat.

I believe he has plans in the works to build a custom frame one of these days too.

It’s hanging in my little corner of the kitchen breakfast bar where I work and blog, etc. and is one of the things that I would grab first if there was a fire or some disaster.  I cherish it. 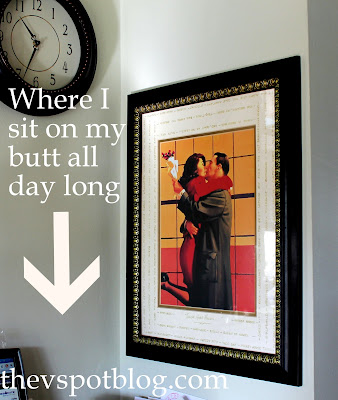 It never fails to brighten my day.  (**The Christmas that he gave this to me, we each had a $25 spending cap and were trying to out-do the other and stay in budget.  He came in at under $25 and made me cry.  He totally won.)

But I need ideas, people!  I must do something great and creative!  Help!