After driving the morning carpool, I feel compelled to re-publish an open letter I wrote last school year.  Why, why, why are people so confused by a 4 way stop sign…?  Why? 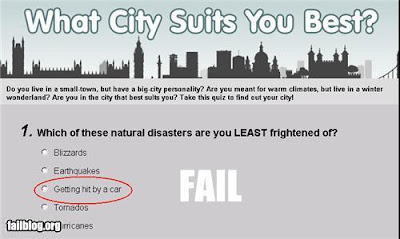 Dear Drivers at the 4-way stop on Montecito and Bostonian,

I know 4-way stops can be confusing, what with drinking your coffee, texting on your phone and yelling at your kids and all.
I know it can be extra confusing because the crossing guard might have her PhD in crosswalk safety and fluorescent accessorizing, but she clearly missed the chapter on traffic patterns and is a card carrying member of the We Hate All Cars Unless We’re Driving Them Club.
Plus I know you (and you alone) are under a time crunch to get your kids to school on time, so allow me to help you out with a little refresher about who has the right of way at a 4-way stop.

If two people arrive at the intersection at the same time, who gets to go first?

The answer is D.
If two people arrive at the intersection at the same time and they are directly across from each other (therefore the “person on the right” rule does not apply), who gets to go first?
The answer is E.
What if one of those two cars is turning left instead of going straight? Who goes first then?
The answer is D.

I hope this has been informative and productive. There will be a test tomorrow, and I can only hope that Allstate will be grading you. Gallery image with caption: Are you a good guest? An easy quiz to see if you’re an over-entitled, self-absorbed, jerk.

Gallery image with caption: How to use an indoor chandelier outside. Gallery image with caption: What does it mean when wine is corked? (How to tell a bad bottle.)