In addition to its over-all yumminess, recent studies have been showing that cinnamon can provide added health benefits. It has fiber and calcium, which helps to improve colon health and to fight heart disease.  It also has been shown to:

There’s a ton of info out there.  Just google benefits of cinnamon.
Here’s how I get my daily dose of cinnamon: 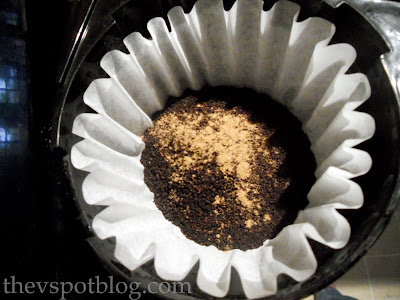 Yep.  Shake a little cinnamon right on top of the coffee and brew as usual.  I tend to put in what amounts to half a teaspoon.

(I don’t have a Kureig, so if you do, well, I don’t know what to tell you, maybe a little dash of cinnamon right into your cup …?)  It adds a little sumpthin’ sumpthin’ to my coffee each morning without being an overpowering flavor AND it helps me to get a little cinnamon in each day.

(And then of course, I take the used coffee grounds into the shower with me in order to get the. softest. skin. ever…)

It’s the little things that we do regularly that help us stay healthy.  It may not seem like much, but it all adds up. I take my coffee in the shower. How to store fresh produce – From A to Zucchini. Turn your old washing machine into a fire pit.