This post may contain Amazon or other affiliate links.

I know it came out a few years ago, but we only recently saw the movie Yes Man, with Jim Carrey.

The premise of the story is that a guy who normally said no to everything was going to say “yes!” to every opportunity that presented itself, and his entire life turns around for the better.  I thought it was uncomfortably funny, but Handsome Hubby took a detour off of Sophomoric Humor Lane and actually found something thought provoking.

What was the lesson that has stayed with him?  To say “yes” more often when the boys ask him to do something with them… Grant in particular.

Last week while camping, Grant wanted to go fishing.  HH took him and let him pick the spot.  Grant wanted to fish from a wooden bridge because it certainly looked the part. (God bless his little romantic soul.)  HH told him that it was actually a bad place to fish, but Grant insisted.  How an 8 year old has a Norman Rockwell image in his mind, I don’t know, but HH set him up to fish there.

HH waited patiently for 2 hours while Grant got the Norman Rockwell Ideal Fishing Images out of his head.  The child did not catch a single fish from that bridge (not even a nibble), but HH let him stay there until he was ready to move on.  Which eventually they did, AND Grant caught a fish, AND he learned how to clean it. 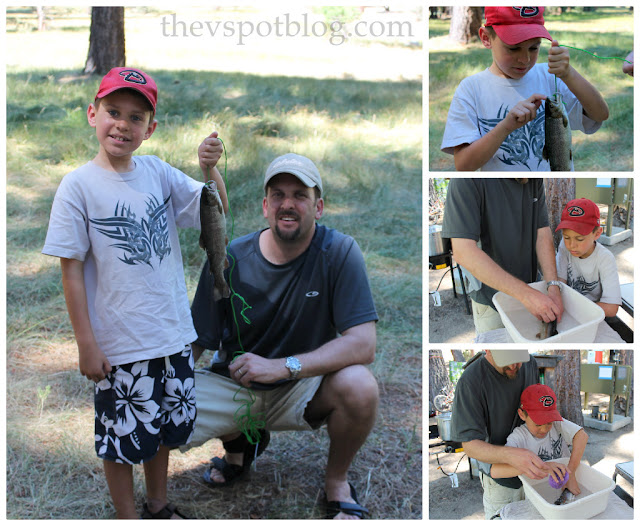 Even as amazing as it was to catch a fish and let Dad teach him  how to clean it, I think that Grant will remember the experience of fishing from that bridge more than he will remember actually catching the fish.

The following was a text exchange between them.

Friend: Hey pal, having  date night w my 5 y.o. girl and saying yes to every ridiculous request…thanks for the tip.

Friend: It wasn’t enough to just buy the toy mermaid, but we had to walk down to the beach to play where she lived… I said “okay, but you’ll get sand in your nice shoes.”  Appropriately, she smiled and said: “who cares?”

That. Is. Awesome.
(I guess I should work on being a better Yes Mom.)