Back to school week has been a busy one for everyone. Did anyone else run into ridiculousness while preparing for it?

Let me share the good, the bad, and the cataclysmically stupid..

The Good:
**I am uber-organized. School clothes and school supplies were purchased on sale and over the course of the summer. In fact, I picked up several things before school even got out for the summer, so I really spent next to nothing, all things considered. I saved money, time and energy.

**Grant started Kindergarten. His school hosts a Kindergarten orientation the day before school starts. The child and their parents come to the school and learn which classroom and teacher the child has. While the children play on the playground under staff supervision, the parents go into the classroom to hear the teacher’s spiel. 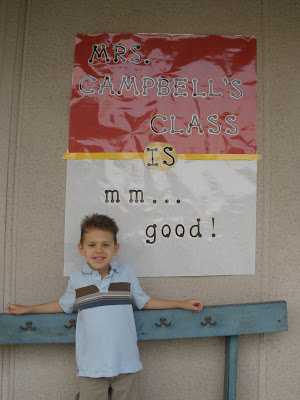 Then the kids are brought in from the playground to meet their teacher, see their classroom and hear half of a story. The teacher leaves them with a cliffhanger, so that they are excited to return the next day. How brilliant is that?

**The Big 3 got registered for their middle and high schools with no trouble. Mitch started his first day of middle school from his mom’s house. I hear it went well. Devin and Conner are happy with their class schedules.

**Grant had trouble sleeping the night before school starts, that’s how excited he was.
He sat and watched a DVD while cradling his lunch box the whole time. He moved a single granola bar into various pockets and compartments repeatedly, so excited for snack time and lunch time.

He was so cute, all ready to go to school like his big “brudders.” 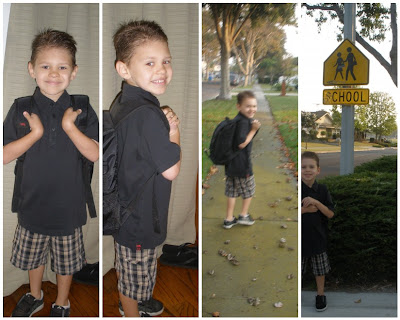 He found his name-tag like he was supposed to, enjoyed the playground before school started and happily took his place in line. He went into the classroom without a backwards glance. 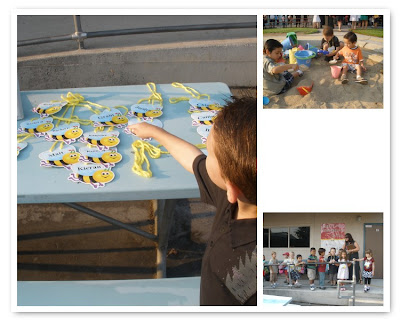 The bad:
**We allowed Conner to take the photo of Mom & Dad with Grant on his first day of school. Blurry and with no warning as to when he would take it. (Grant had little patience for pictures that morning, so re-takes weren’t really an option.) Conner has opposable thumbs, but he doesn’t like to use them. That’s what we get for asking him to be the photographer, but there was no other choice. 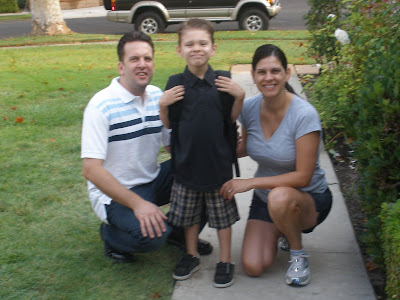 **I thought I’d be a little teary-eyed at this milestone, but I did OK. I was early to pick him up though and couldn’t wait to see him. He was the first one out of the door. He took one look at me, burst into tears and ran to me. “Mom, I missed you!”

You could’ve knocked me over with the proverbial feather… I so wasn’t prepared for tears. 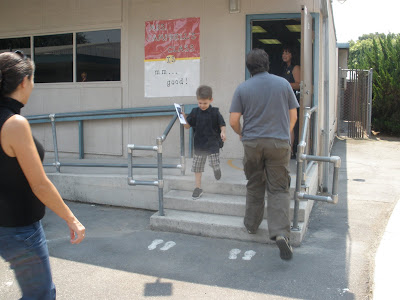 **It turns out that for all that packing and unpacking of his lunch box, he was too excited to eat lunch.

He didn’t eat his sandwich. He opened up his Go-Gurt (the yogurt in the little tube) and decided to save the rest for later. When we opened up his brand new lunch box it was like yogurt had exploded in there. Pink goo everywhere.

Also, it seems he had a little emotional meltdown over his fruit roll-up. He took it out, unwrapped it and set it down on the table while he opened his yogurt and drank his juice. It has been so hot, that by the time he turned his attention back to the fruit roll-up it had melted onto the table and he couldn’t pick it up again. He was inconsolable.

**There is also a scary crossing guard by Grant’s school. Apparently, she has her PhD in Crosswalk Safety from Hitler University. She is so terrifying (to parents and drivers alike) that I have to resist the urge to dart out from in between two parked cars and run across a 4 lane avenue like a spooked squirrel.
I fear that rather that encourage safe crossing, she is actually scaring kids away from the crosswalk.

**For some reason, Devin and Conner make up two sides of the Bermuda Triangle Of Bikes. Flat tires, broken chains, ill-fitting helmets and stolen bikes… So as a precautionary measure we had full bike maintenance the weekend before school.
The first morning, Devin still had a problem with his bike chain.

**Devin is chronically late and makes excuses as to how it isn’t his fault when his buddies come by to ride to school with him. They wait for him. We keep telling his friends that they should leave his tardy ass behind, but they wait anyway. Instead of their impatience and disapproval motivating Devin to hurry up, Devin drags them all down to the slowest common denominator. He was late again on the first day.
His friends still waited for him.
He still made excuses and blamed his alarm clock.

**Conner has a jerky kid on his soccer team. We, as a family, now refer to that kid as The Little Shit. Handsome Hubby is an AYSO referee and has complained about this kid’s attitude and antics on the field before. This kid is a jerk and a bully and he is putting a serious damper on Conner’s enjoyment of the game.

**I spent Monday afternoon until Tuesday afternoon hooked up to electrodes and a 24 hour heart monitor to record heart palpitations and bouts of lightheadedness I have been experiencing. Tuesday afternoon the cardiologist took off the monitor and had me do a treadmill stress-test and did an echo cardiogram. Still waiting for a conclusive diagnosis, but it looks like I have a type of arrhythmia that is directly connected to stress and fatigue.

I need to avoid stress if possible and cut back on alcohol and caffeine.

Are you freaking kidding me?

To loosely borrow from Airplane, I picked a bad week to quit sniffin’ glue.

The Stupid:
**(Shoes, part 1) The first morning of the new school year, Devin came to me saying, “Mom! Were you aware that my heel comes up out of these shoes when I walk?!”
Um, no Devin. Since you tried them on in the store, walked up and down the aisle and declared that they fit, I took you at your 17 year-old word.
Silly me.
Turns out that they were a full size too big. We’re still not sure exactly how that happened.

**(Shoes, part 2) After the first day of school. Devin came to me saying, “I forgot. I’m not taking PE this year. I don’t need PE shoes or a lock for a PE locker.”
We already bought the PE shoes on the same shopping trip as the others. Fortunately, I hadn’t yet purchased a lock from the high school. (Sometimes I am so thankful for the little things.)

**(Bike, again) After having his bike stolen from the school’s bike rack last year, after deciding not to use the lock (“Lots of kids don’t…”) he returned from school and casually mentioned that he once again didn’t lock up his bike, but not because he was making a choice.
He didn’t have a choice: He lost his bike lock somewhere and needs another one.
Now I need to go buy another bike lock, or risk having this bike stolen or I have to drive him to and from school.

**(Teeth, part 1) During a check-up with our orthodontist, I was informed that Conner has not been wearing his headgear faithfully (or long enough). Conner promised to do better and I promised to watch Conner more carefully.

What did Conner go and do? Left it in the waiting room.

What did I go and do? Didn’t notice he wasn’t wearing it for two days.

Not only did we both not keep our promise to the orthodontist, but he and his wife are friends of ours and I am super embarrassed. My slacker mom slip is showing. I had to drive back across town, slink into their office with my tail between my legs and retrieve the headgear with a promise to do better.

At least I was able to roll it into one morning of errands that included picking up the results of the TB test I had to get in order to set foot on school grounds as a volunteer, and returning shoes that weren’t needed/didn’t fit…

**(Teeth, part 2) “Oh no!!! Mom!!! I dropped my toothbrush down the drain!!”
What? Yep. Don’t ask me why, but the stopper thingy in the sink is missing in the boys’ bathroom. While brushing his teeth, somehow Conner dropped his toothbrush straight down into the drain. …’Nuthin but net. It is too far down to pull out, so Handsome Hubby gets to take apart the sink trap to get it out this weekend.

**(Teeth, part 3) Conner is doing a special skin care regimen right now. He’s got a little hormone poisoning and some wash, some toner and some special skin cream are part of his night time routine. The products aren’t terribly expensive, but they certainly are not cheap.

After applying this medicated cream to his face, I discover him brushing his teeth, and while getting water to rinse his mouth, he sticks his whole face under the faucet. In other words, while rinsing the toothpaste out of his mouth, he also rinses all the costly medicated cream off of his face…. and has been doing so for at least a month. AGGGH!
No wonder it wasn’t working as well as the packaging promised.

**Now this is completely unrelated to back to school, but certainly qualifies as cataclysmically stupid. While running all my errands, I saw a guy coming the opposite direction on the street. Stuck in traffic, I noticed him at a stop with his window down in the left lane. Going the opposite direction, but also in the left lane, was a police car. In other words, Stupid Guy (SG) and Cop were 3 feet away from eachother… driver’s window to driver’s window. SG wasn’t wearing his seatbelt, which is against the law in California.

My question is this: Why not just put it on for real?

Does he think it is more uncomfortable to wear a seatbelt than it is to go through a windshield?
Does he think it’s uncool? As if someone will say, “Gee, look at that idiot! He’s trying to save his own life. What an ass!”
It’s obvious he didn’t forget to put it on, because if that were the case he would have put it on for real when he saw the cop.

I hereby dub him Cataclysmically Stupid Guy. My kids may give him a run for his money in individual events, but he takes the prize for Best In Show…