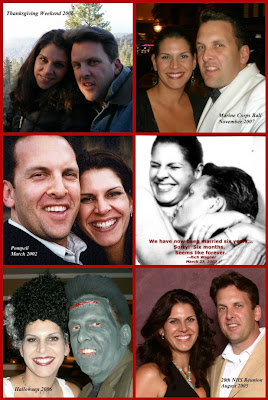 Handsome Hubby and I celebrated our 6th wedding anniversary on Saturday.

We were in the 6th grade together (although I don’t really remember him at all) and we began dating in High School. I was head over heels then he broke my heart and left me to carry a torch for him for 20 some years. I couldn’t wait that long for him to come to his senses, so life goes on. I got married, had my two beautiful boys, got divorced, got remarried and quickly got divorced again (we try not to talk about that fiasco too often).

By that time Rich had gotten married, had Mitchell and gotten divorced too. He finally came to his senses and we sort of picked up the pieces where we left off, now a bit older and wiser and knowing what is truly important. I moved back from Portland and a month later we got married. 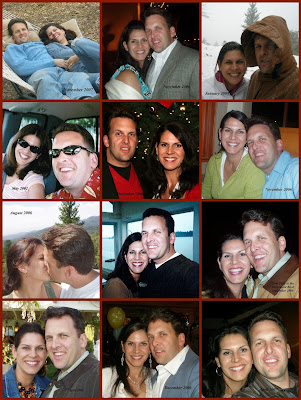 We got married in Wardlow Park in Long Beach on a Friday night. Rich never actually proposed because we knew we were getting married. On Wednesday the 25th he said “Does Friday work for you? Yes? OK, I’ll call the judge and set it up.”

Rich brought home Taco Bell for our wedding feast with the boys and then we went over to the park. The boys played on the park equipment while a judge married us a few yards away. After we were pronounced husband and wife I went back to the house while Rich stayed at the park and played with the boys.

Back home later on, the boys had gone to bed, Rich was channel surfing. Given that this was our wedding night, I let Rich know that the boys were asleep and that we were all alone, hint hint… He said “Why don’t you go ahead. I want to see how this VH1 countdown finishes out.”

I’m sure I made some sarcastic comment about romance being dead and went to get ready for bed (and I briefly considered putting cold cream all over my face just to mess with him.) Once he knew which hair band had the biggest hit in the 1980s, Rich took me in his arms, looked deeply into my eyes and said, “You’ve been married 3 times. Baw-ha-ha-ha-ha!!!!”

It’s been nothing but romance ever since.

And trust me, there is a lot of romance in squabbling children, house projects, paperwork, soccer games, baseball fundraisers, PTA meetings, sickness, health, burned dinners, late nights at the office, grocery lists, bills to pay, reruns on TV and messy bedrooms…. you just have to learn to see it.