Grant spent the weekend at Gramma & Poppa’s house. In addition to serving waffles on demand, Gramma is cool because she likes boy things. Dinosaurs. Planes. Space shuttles. Science. (shut up shut up shut up. Yes. I am sexist. I think math and science are boy things. ew.)

Anyhoo. Under the umbrella of science (both literally and figuratively) they caught earthworms that showed up with all of the rain. When we came to pick him up, he proudly showed us the 4 worms they caught. They were in a round plastic container with air holes poked into it. Turning the container in a perpetual circle, Grant proudly introduced us to the 4 worms:
This one’s Wormy.
That’s Stripey.
This is Jumpy.
This is Wormy.
That is Long-y.
(Did I mention there were only 4 worms…?)
This is Slimey.
This is Wormy.
This is Speedy.
That one’s Slow-y.
That’s Wormy.
This is Wiggly…….
Keep in mind there are only 4 worms… He also drew their portraits. We took the art and the worms home with us, and I pray to God that Rich helped Grant release them back into the wild and that they are not drying up and forgotten in the depths of an overnight bag. (Note to self: follow up on that when finished with this post…)
Grant also came home with new stuffed animals. 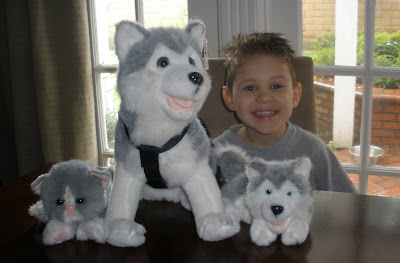 From left to right: Cat-Cat, Dog-Dog and Pup-Pup.
At least they aren’t all named Wormy.
~~~~~~~~~~~~~~~~UPDATE~~~~~~~~~~~~~~~~~
The worms have been found. They were left in Rich’s car overnight. They are still alive, but there are only 3 worms left. That means that:
a) one escaped and is loose in the car
b) the other worms got hungry and ate him
c) there were only 3 worms all along, making the multiple names a bit more funny.
I have my fingers crossed and am hoping the answer is c….
(The surviving worms will be released into the wild upon Daddy’s return home from work.) “Each day is better than the next.” – Dom Wooginowski (kidding.)