ABC premiered a new show last night. (I did not watch. I’m a House person.) There was something vaguely familiar about an online ad I saw for this new show, Roommates. Here is the description, from the show’s website:

Mark has a crush on Katie, so what’s he do? Becomes her roommate. Smooth. They also live with Hope, a career woman … um, without a career. And roomie No. 4, James, has advice for everyone, but he’s no better off than anyone. And finally there’s Thom, who doesn’t live in but hangs out a lot. Hookups, jobs, and other embarrassments keep the laughs coming as five twentysomethings try to figure it all out.

Hmmm. Have you ever heard of a show called FRIENDS? It ran on NBC for a little while…. 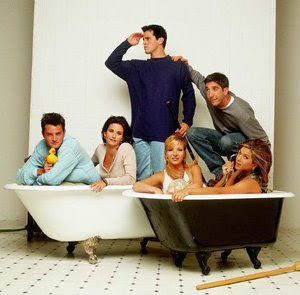 Perhaps ABC’s demographic are the people who are too young to realize that Jennifer Aniston was on a TV show prior to becoming Brad Pitt’s ex.