I am thrilled that a panel of some of my favorite bloggers judged my Cowhide Dresser as one of the Top 6 entries in Not JUST A Housewife’s DIY Projects of 2011 contest.  There were almost 800 entries, so I am pretty darn excited about that!

Now readers vote on the Top 6 to decide who gets the Top Spot.  I’d love it if you would go over and vote. If you vote for my dresser, that would be awesome, but there are some Uh-Mazing transformations that I am up against.  You can vote once a day, through Friday, January 13.  Thanks!

On to Facebook: I received a lot of positive feedback on yesterday’s post where I publicly busted my son for being on the site in the middle of the night.  (He claims that he didn’t think I’d be mad if he posted a quick status update before he went to bed… He has now been informed of my policy on midnight posting.)

Only two of our four boys have accounts.  They do not have them because they reached an arbitrary age requirement, but because we felt that they were mature enough/responsible enough to understand the basic principle that the internet is written in ink, not in pencil.   If you have any worries about your kid’s discretion, don’t let them get an account.

Even once the child is allowed to get an account, there are conditions.  Our kids do not have any inherent right to privacy while they live under our roof.

Condition #1 – They must be “friends” with me.  This helps me monitor what they’re doing and when they’re doing it. (As evidenced by yesterday’s post…) 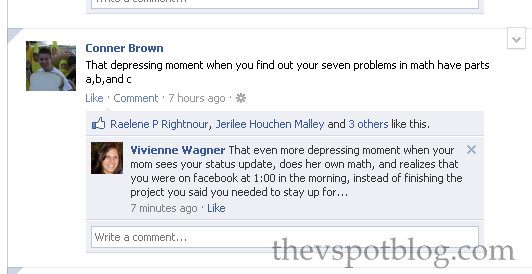 Condition #2 – I must know their password.  This serves two purposes.

**Updated to add:   I haven’t had to revoke Facebook privileges very often, but when I did, I made sure my new, secret “Punishment Password” was something like totallylame1 or stupid-stunt   When they finally got their account back, I gave them the secret password.  They had to log-in as totallylame1 in order to reset it.  heheheh.****

As a parent, it’s my job both to protect and to teach… sometimes simultaneously.   What do you think?  How do you monitor your kids’ Facebook activities?  Or do you?