If you’re here for a craft tutorial, a funny story or a DIY project, I’m afraid you’ll have to come back later or peruse the archives for them.  I’m going the serious route today: love, life, divorce, death, and what I’ve learned about grace, forgiveness and strength of character.

My family has had a very long, very emotional 3 weeks.

My ex-husband Mike has been battling colon cancer for almost 4 years.  Three weeks ago the doctors told him that he only had a few days left to live, maybe a week or so at most, and that he needed to gather his family around him.  That meant I needed to get my two oldest sons (Devin and Conner) out to the hospital so they could be by their father’s side.  We knew that moment was coming.  I was surprised it hadn’t come sooner… but Mike was always stubborn and did things his own way.

Mike and I split up when I was pregnant with Conner.  As you might imagine, it was a very contentious and acrimonious process.  For about 5 years, we could barely be civil to each other.  When HH and I got married, he insisted that Mike and I get along.  He said it was non-negotiable and that it was the best thing for Devin and Conner.  You know what happened?  We actually repaired our relationship enough to be civil.  Then cordial.  Then we occasionally would even have moments where we caught a glimpse of the friends we once were.

While I never, ever spoke disparagingly of their dad to Devin and Conner, I harbored contempt and bitterness toward him in my heart…  And although I have been blissfully married to Handsome Hubby for almost 10 years, I had never really forgiven Mike for leaving while I was pregnant.

When Mike first got sick, I was worried about him, but I was mostly mad at him.  He had let it go until it was too late.  He ignored symptoms and family history.  In other words, he didn’t act responsibly… he did the very things that used to make me crazy when we were married.  It might have been a very different outcome had he sought help at the first sign of trouble.

Cancer is scary.  It’s evil and insidious.  It might go away, but it steals your peace of mind.  They thought they got it all and that Mike was on the mend, but the cancer came back.

Devin and Conner spent every weekend with Mike, who had needed to move back in with his parents due to his condition.  As his condition deteriorated, it only fueled the boys’ devotion to their dad.

In and out of the hospital, we thought we’d lose Mike around Christmas-time.  Amazingly, he kept fighting and bounced back a little.  But by the end of February he was readmitted to the hospital and told he only had a few days left… which is when the boys packed overnight bags and I took them out to stay by Mike’s side for what we thought would be just a few days.  That first afternoon and evening in the hospital I sat with them in their Dad’s room.  He would frequently nod off and be disoriented when waking up.  He had tubes and IVs and was in constant pain.  His cancer seemed to be particularly cruel.

The boys were out of the room and I sat by Mike’s bed as he slept.  I watched him sleep and thought about all of the water under the bridge… the range of emotions from love to hate and from laughing to shouting.

I laid my hand on his and said a silent prayer that he have peace in his heart, comfort in his soul and no more pain in his body.  I prayed to let go of any anger I was still feeling, because if you truly do reap what you sow, Mike had paid for it, and then some.  And even more, who was I to even be judging at this point?  This wasn’t fair and it wasn’t right.

Mike opened his eyes and he took my hand because he could see I was tearing up.  I told him I loved him. He said he loved me and he was sorry.  In that moment we made our peace.  We sat like that until the boys came back.

Since Mike left when I was pregnant with Conner, I don’t have any photos of the 4 of us together.

Mike and I could put on happy faces for Devin’s school events, but adding Conner into the mix just never happened.  We had never been a family of 4.  When they came back, the boys and I sat around the bed, laid our hands on Mike and we each took a turn saying a prayer.  A prayer of thanks, a prayer of protection… a prayer of love and gratefulness and healing.  Mike thanked God for us as a family.  We had a loving moment as a Family of Four.  It was the only time it had ever happened.  I am so glad for all of us that we had that moment, but am especially glad for Conner’s sake, as he had never known anything but us as divorced people.

I cried the whole way home in the car.  I expected that I wouldn’t see Mike again.  Every time the phone rang I anticipated that it would be the boys, calling to tell me that he had passed… but the only thing that was passing were the days.  I was worried about the amount of school they were missing, but there was no way I was going to tell them that they needed to leave the hospital.  As long as that’s where they wanted to be, they had my support to stay there.  They spent the days at the hospital with him and alternated spending the nights in his room.

As the days passed, Mike became increasingly agitated, was often hallucinating and was seldom lucid.  Devin and Conner worked as a team, calmly caring for their dad and working with the medical staff.  They got up in the night with him when he would call for nurses or need more pain medication.  I knew they were amazing kids, but it wasn’t until I drove back out to see them again that I saw them in action and understood the depth and breadth of the care they were giving him.

Taking care of Mike had become similar to taking care of a sick toddler.  The boys fed him ice chips, gently removed his hand when he tried to pull out his tubes, talked calmly to him when he was clearly delusional, (sometimes going along with it, sometimes reassuring him that it wasn’t real and that he was OK) and they advocated for his care with the medical staff.  The thing that struck me the most was that they conducted all of this with all of the respect and dignity that Mike deserved as their father.  They were patient, they spoke calmly, repeated things over and over if necessary, but always remained loving and respectful as they did so.  There is so much indignity that Mike suffered because of this disease… the boys’ respectful and loving care was truly a gift.

I watched them care for him and was amazed.  While they were on a break, I sat with Mike and fed him ice chips.  I moved his hand away from dressings and tubes when he was pulling on them.  I followed the boys’ example and spoke calmly to him.  As I did so, it occurred to me that even though we had been divorced more than 15 years, I was sitting there and I was upholding my vows.  For better or for worse, in sickness and in health, and until death do us part.

Why couldn’t I have had this mental shift sooner?  I would have done things differently.  I would have actively worked at getting rid of my residual bitterness.   It wasn’t like it was something that was front and center.  I didn’t really ever even think about it… I mean, if the house is clean and organized, why worry that there is a mess in one corner of the garage, right…?  But there was a little mess in my heart that I just closed the door on and I didn’t think I needed to open up and deal with.  This sad situation allowed me to do that.  I’d like to think that Mike was able to do it too.  Watching the boys in action helped to drive the point home.  They reminded me of where life’s priorities need to be and that our time here on earth is finite.  No time or energy should be spent on negativity.

Mike was moved from the hospital back to hospice care in his parents’ home.  He passed away March 20.  Devin and Conner were at his side, which is how all three of them wanted it.  The boys each held his hands.  Conner said Mike was taking rapid, shallow breaths, then took one long one and didn’t take another.  Both boys began to cry, and they think it was like Mike could hear them and then struggled to stay, because he began the rapid breathing again.  They boys told him they loved him and that it was time for him to go.
And he did.

The funeral was yesterday.  Conner wrote and delivered the eulogy and Devin wrote a letter to his dad, which he read during the service. 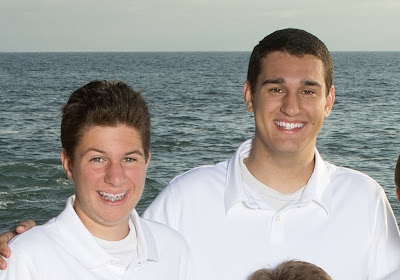 They were amazing.  I am in awe of what strong, compassionate and downright phenomenal young men they have become.  They have even become closer as brothers through this experience. 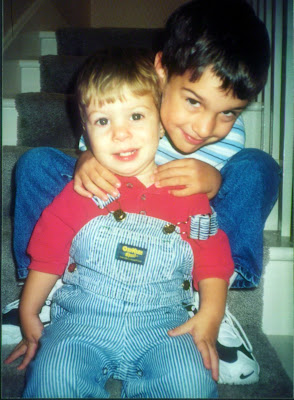 There was a slide show running on a loop at the reception, watching it helped to replace the mental pictures of Mike at the end, with mental pictures of Mike in his prime.  It reinforced the idea that I need to ensure that Devin and Conner continue to develop and strengthen their relationships with Mike’s side of the family… I owe that to both Mike and to the boys.

I don’t understand God’s timing… or His plan, but I know that it’s perfect.  I was questioning the length of time the boys ended up being in the hospital, but I can see now that it helped them begin to grieve a bit early and helped them distinguish between the quantity and the quality our days..
It made it easier to let go.  For everyone.

For the past few weeks, each morning I have woken up with this song in my head.  Literally, I open my eyes and this song is running through my head.  It’s become like a morning prayer.

Thanks for listening, thanks for your support and thank you for your patience.  I’m hoping to be back to normal and a regular blogging schedule in the next day or so.