Much to his big brothers’ dismay, Grant has been watching Dora the Explorer, Go Diego Go, The Wonder Pets and Curious George lately. They frequently have episodes where the characters “track” an animal of some kind.
Rich is also an avid outdoorsman and even has a book called Animal Tracks & Scat that was his bedtime read for a while. (Personally, I think the book would be more accurately titled How To Follow A Bear’s Tracks To Find His Poop….) But I digress.
The point is that Grant is aware of tracks, and the concept of following them.
The other morning, Rich got in his car to leave for work, forgot something, and had to run back up to the house. He ran through the wet grass to do so. Five minutes later, Grant and I left to run errands. He spied Rich’s foot prints and in great awe, excitedly shouted out “Mom!!! Look!!!!! Dad tracks!!!” He was absolutely thrilled by his discovery. 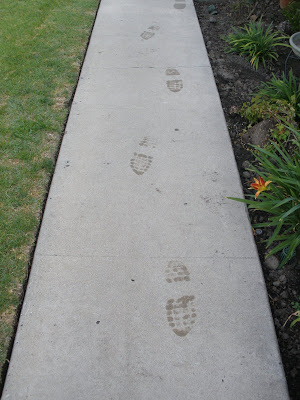 I wonder if he realizes he leaves his own “tracks” through the house….
They take many forms (crumbs, fingerprints, Hot Wheels, discarded pajamas, the pillows off of the couch….) I imagine that a little animal leaving those tracks would look something like this. 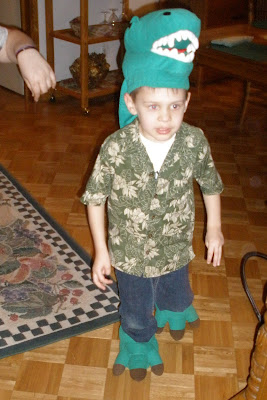