Check out Part 1 of this story for the details, but in a nutshell: My best friend Eva and I went to Mexico, just the two of us. We stayed at a beautiful resort and were lazy slugs by the pool for a week.   On our second to the last day, Eva decided she wanted to go snorkeling. A waiter told us we could hop on a shuttle bus to a great snorkeling spot, where we would be able to view lots of sea turtles.

First, lets be clear. The shuttle bus? It’s a rickety, hot, regular old bus, with regular stops… if by regular stops you mean it simply pulls over and dumps you on the side of the Mexican freeway.  I cannot be sure, but one of the other passengers may have been holding a live chicken. 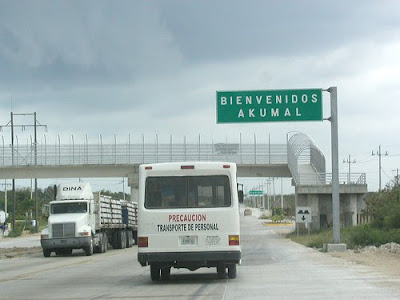 I got this image from flickr.  I only wish we had been on a sturdy little shuttle like this one. However, this was our “stop”… We were fortunate enough to be riding with an Australian man who told us where we needed to get off the bus and which way to start walking.

The bus pulled away and left us on the side of the highway, with a dirt road leading away from it. We started walking. There was jungle on each side, save the small drainage ditch that ran along side the road. Dirt road, jungle, ditch… (oh and iguanas) but no directional signs. 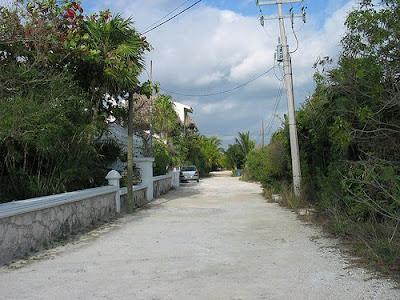 This image is also from flickr and is representative of the road we were walking down… except ours didn’t have any structures or cars….

I am pretty good at keeping my bearings.   To quote Kuzco from The Emperor’s New Groove, I have an i-nate sense of di-rection.

It might have been the Mojitos I had been marinating in all week, but I felt a little jumpy.    I couldn’t tell if we were walking towards a beach or if we were walking deeper into the jungle.  How far did this road go…?   Where were the other people, if this was such a great place to go snorkeling?   Wasn’t there a horror movie about tourists getting chopped up on some foreign beach…?

Also? I really wasn’t into the whole snorkeling thing and was a bit nervous about it.

Finally we see a billboard type sign with the name of the village and a sea turtle logo.  Great!   We assumed we were heading in the right direction.

After what turned out to be a half mile walk, the jungle gave way to Margaritaville. It was a beautiful, postcard perfect little bay, with palapa huts, little beach-side restaurants and little shops. The only thing missing was Jimmy Buffet. My reservations about the outing lifted immediately. 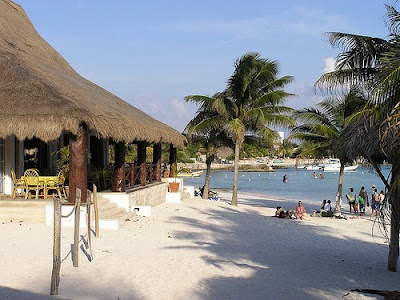 The water in the bay was a beautiful, clear light blue. There was a gentle breeze blowing, people were laying in hammocks with Margaritas and magazines… Gorgeous!

We made our way to the little shop to rent our snorkeling gear. The rotund man behind the counter looked like he had his own built in flotation devices. He asked what we were looking for and we happily chirped, “We want to go snorkeling!”

Things the proprietor should have asked us:

Our answer to each of those questions would have been: NO.

Our only questions for the proprietor:

His answer for each of our questions: NO.
(Although he did warn us that there were sharks in the cantina, heh, heh, heh.)

Lucy & Ethel… Dumb & Dumber… pick your duo. We were ready to go. So we have the gray matter to not walk from the shop to the beach in our fins, but we do not have the brains to wait and put them on once we actually start swimming. We put them on our feet, right where the water meets the sand.

Have you ever taken a water aerobics class?
I haven’t. But it can’t possibly be any harder than walking through waist deep water with diving fins on your feet. It’s hard to lift your feet with those big ole’ flippers, serving as weights.

Given that there is such a big reef, the water is very shallow in the bay. We had to walk (in flippers) out quite a ways before the water was even up past our hips. Finally it was deep enough where we could swim without banging our knees on the bottom.

After quite a while, it still felt like we were swimming in about a foot of water. There were fish everywhere, but no turtles in sight. We kept heading further out into the bay, thinking that if we got into water that was actually deeper than 4 feet, we might actually see something.

Have you ever been snorkeling before? It looks easy… I thought it would be easy.
It.
Is.
Not.

The snorkel doesn’t just nicely fit in your mouth and you breathe through it. You have to clench the mouthpiece in your teeth, and perse your lips over it. It is actually exhausting to try to swim while clenching your teeth and with your jaw tensed. See if you can even take a shower, clench your teeth the whole time, and not get tired. Who knew that the muscles in your neck and jaw could affect the muscles in your legs?

(Of course, had I stopped for a moment to think about the first time I sneezed after giving birth to a baby, I would have remembered that everything in the body is somehow connected…)

My mask felt like water kept leaking into it. The rubber straps pulled at my hair. It was either too tight and hurt my head, or it was too loose and let in more water. Between my mask and the snorkel, I stopped swimming frequently to adjust things. Fortunately, this was easy to do… I just stood up. Even after a long while, it seemed the water was only up to my chest.

As we swam along, we stayed at the surface, faces in the water, looking for the sea turtles. Had I not seen them in photos and at the aquarium, I might have believed that we were searching for the Loch Ness Monster, that’s how elusive these suckers seemed to be.

As we swam, we were a) looking for the turtles; or, b) looking for the other person. We either managed to swim right on top of each other (since we are looking down and not where we’re going) or we were getting too far apart.

We were not looking at how far out we were from the shoreline.

And why would we? The water was barely over our heads. I mean really… how far out could we possibly be? So after about half an hour and as we were swimming along, the floor of the ocean suddenly dropped off and the water went from shallow and warm… to deep and cold.

I stopped swimming and brought my head out of the water, looking for Eva. As I lifted my head, it was just in time to see a big boat go speeding in front of me. Very close. Probably 10 feet in front of me. I did not see the boat’s occupants, but I heard one of them.

In a thick Mexican accent: “Heeeeeeeeey. Watch out for de shaa-rrrrrrk…”

Very funny, Asshat. First of all, I’m swimming here, and it seems like you almost took my head off, what with your boat speeding through a tranquil bay and all. Second? Ha ha, very funny making a shark joke to a swimmer. Jerk.

I looked around for Eva and spotted her about 30 feet away. She was swimming along, face down, still looking for those stupid sea turtles. As I watched, she pulled her face out of the water, threw her arms in the air, waved them about and started shouting.

“Thank God” I thought…. she finally saw a stupid turtle and we can stop clenching our teeth over these mouthpieces and go and get a drink now!

And she turned and began paddling like mad for the shore.

I cannot describe for you the terror I felt at that moment. I think the only thing that kept me from peeing in my bikini bottoms was the voice in the back of my head that frantically warned that pee might attract the shark. (Much, much later I realized I was thinking of pee on a jellyfish sting… which is helpful, actually.)

I whipped my head around, trying to look everywhere at once. In my panic, I lost my snorkel. (Yet I still was financially cognizant, for I thought, “Oh. Great. They’re gonna charge me for that.”) With no method to breathe underwater, I repeatedly slapped my masked face into the water, trying to see the shark. I couldn’t see it (intensifying my panic) and turned to flipper as fast as possible towards shore.

You know the phrase my heart sank? Yeah. I felt that. It’s a real thing.

We were more than 100 yards off shore. We were out of the bay and into open ocean.

(You know, I thought I could finish this up in two posts, but I think it is going to take three. Will you come back for the rest a little later…?)

Catch up here to read Part 3