Handsome Hubby and I have been butting heads over our garage.
Not only about whose mess/clutter is on whose side of the garage, and who has more crap than the other, etc.  but also about the windows in our garage.  I hate that you can pull up into our driveway and see what is inside, right up against the door.  (A filing cabinet, gardening supplies, sports equipment, etc.)

I also hated (Hated!) that as you were walking up to our front door you could see the entire messy contents of HH’s workbench/crap filled horizontal surface.  (This is also something my mother commented on.  Often.  “Your house looks so cute until you see the crap in the garage window….”) 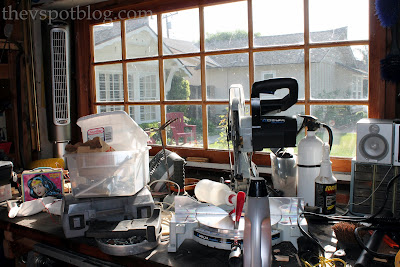 I had wanted to hang up curtain panels, or spray the glass with frosting spray, anything actually, to block out the mess.  HH claimed he needed to be able to see out onto the lawn, needed light, etc.  He wanted to put up blinds (which I strongly suspected wouldn’t happen).  So for a few years we’ve been talking about it, arguing about it, but not doing anything about it.  (We’re supah-motivated like that…)

Wallpaper For Windows to the rescue.   They contacted me about trying out some of their removable covers/clings for glass.  They have a huge selection on their website.  I couldn’t decide.  I couldn’t think of a creative project.  I knew I wanted to do something fun.  (Of course all of the Mike stuff was going on during this time, so my creativity had taken quite a hit…)
Then it dawned on me: The Garage!

I only measured the glass panes on the garage door  because I assumed the panes over the workbench were the same size.  Then I counted up the total of panes and sent in my request to Wallpaper For Windows.
(Tip of the Day: NEVER assume that all of your windows are the same, exact size.)

Wallpaper For Windows cuts the pieces to your specifications and sends them on a roll of peel and stick backing, along with the super easy instructions for installation.  It turns out that the window panes over the bench are slightly larger that the panes on the door.  (I didn’t measure them because they were too hard to get to.  oops.)
The funny part?  My measuring mistake was the perfect husband and wife compromise. 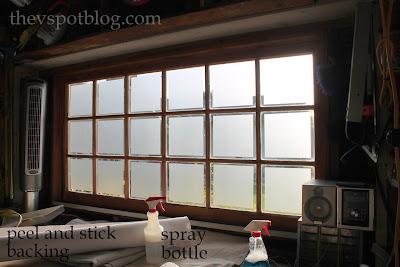 We ended up taking the slightly undersized frosted squares and centering them on the glass. This is very easy to do.  Clean the glass, then spray it with water that has just a few drops of liquid soap in it.  Peel the Wallpaper and “float” it into place.  Then you just take a credit card (or something similar) and squeegee it into place.  Ta Da! 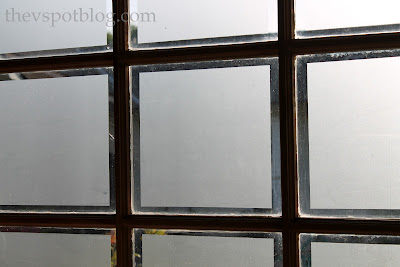 Even though I mis-measured the panes, centering the frosted squares worked for both of us.  HH can still see out and doesn’t feel like it is too dark.  I am happy because you can’t see the crap as you walk up to the front door.  Winning! 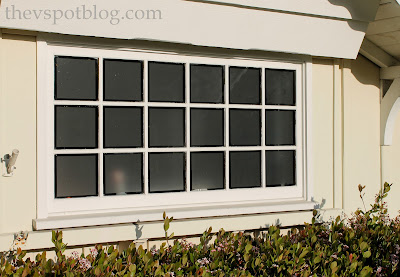 Much better!
The garage door looks better too. Upcycle an old bottle to make a dish soap dispenser. A DIY, personalized wedding or anniversary gift for less than $20