I had kind of an odd Father’s Day Weekend.
Handsome Hubby took the two younger kids and went up to spend the weekend with his parents (they live about 3 hours North of us…)  I wanted to stay around to make sure that Devin and Conner got through their first Father’s Day without their dad (they did, they spent time with their uncle and his family)  so I ended up spending Father’s Day weekend with (gasp) my Father!

My sister and I spent the weekend at my parents’ house.  It was just the 4 of us, which I don’t think is something that’s happened for about 20 years!  (No husbands or kids, just us.) 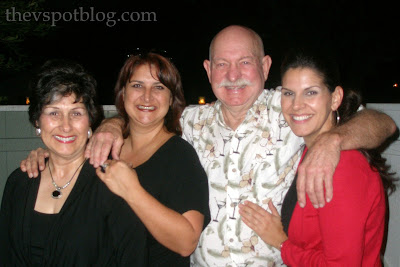 My mom made an amazing (really bad for you) breakfast on Father’s Day morning.

Bacon Waffles with a Peppered Egg. 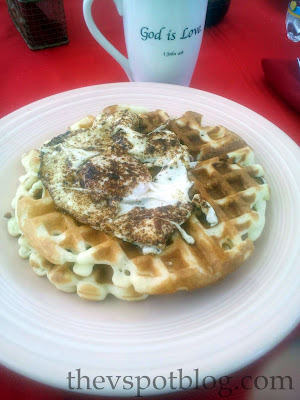 Oh my word, but this was good.
She fried up little bits of bacon so they were nice and crispy, then she mixed up a basic waffle batter (using Bisquik, I think) and added the bacon and a generous dollop of good vanilla extract to it.  While the waffles were cooking, she fried up the eggs (in the bacon grease!) with a lot of pepper.

Good grief it was good.  What did you do for Father’s Day? Baked Eggs in a Polenta Crust