Handsome Hubby and I decided to have a Halloween Party this year. (OK. I decided to throw it and told HH that I hoped he would attend…)

I want to do this as inexpensively as possible, but with style. Invitations set the tone. I was able to snap up some silver/black toned iridescent card-stock that was on clearance at JoAnn’s (and I had a gift card with which to do it! Yay!)

I opened a Word document and formatted 3 columns on landscape setting. I typed up my party details and inserted a spider photo I snagged from The Graphics Fairy. I copied and pasted the text and photo into all 3 columns and then simply printed them up on regular white card-stock that I already had on hand.

I took them outside and laid them all out on the grass, then took some lightly watered down red acrylic paint and splatter painted them. (Note: do not try to do this over your kitchen sink first. Just trust me on this one.) 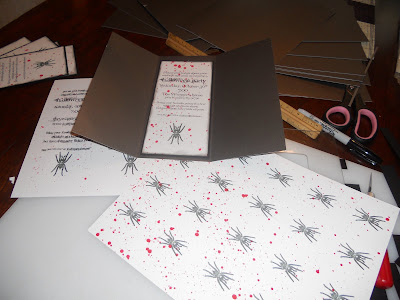 The splattered paint dries very quickly. I cut the invitations into the three pieces, smeared and smudged the edges with black ink on a sponge then attached them to the center of the silver card-stock.

I folded it up, like a letter, wrapped a black ribbon around it and affixed a spider cut out to the ribbon. 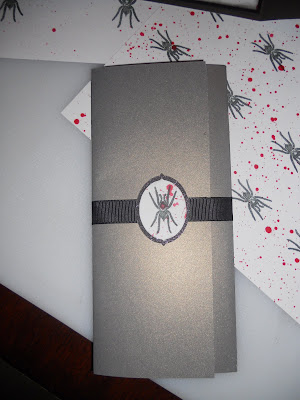 I think they’re pretty cool, but not nearly as cool as making 30 invitations for less than $10.

By the way, HH and I have NO idea what to dress up as this year. I welcome your suggestions. Make a leather studded punk Pumpkin for Halloween. (“Mom…? Why did you make an S&M pumpkin…?”) Pumpkin Round Up: 10 pumpkin ideas