We are still in laid back camping mentality around here.  (Doesn’t mean there’s been time to lay back and relax, but I am there mentally.)  I’d love to be sitting at a picnic table and playing games with my family.
What are your favorite games to play while you are camping? Today I thought I would share a couple of ours, as well as how to play our favorite card game, Tic. 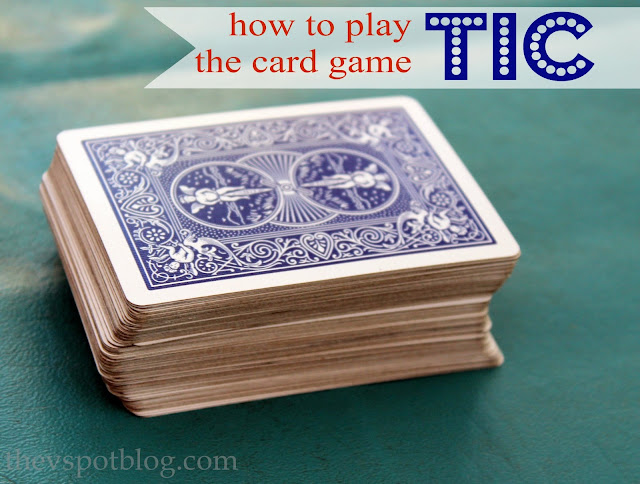 I think there are several different versions of Tic, but this is the way that we were taught to play.  You can play with 2 players (HH and I do it all the time) and up to 6 players.  Any more than that makes the game get really slow.
The Object of the Game:
To be the first player each round to “Tic” and get rid of all of your cards, and to have the lowest number of points at the end of the game.  You “get rid” of your cards by grouping them into sets of 3 or more, all of the same card (ie three Queens) or having a straight flush.

How to play:
Start by taking 2 standard decks of cards (including the jokers) and shuffling them together.   You play in rounds in each game.  For the first round, each player is dealt 3 cards. Jokers are wild and 3’s are wild (because you have 3 cards).  The dealer turns over the top card on the remainder of the combined deck and creates the “discard pile”.  The person on the dealer’s left goes first.  They can either pick up the card on top of the discard pile or draw from the deck. They can keep the new card or discard it, but they can’t have more than three cards.  Remember, the object is to create a “set” of cards and to “Tic” before any of the other players. 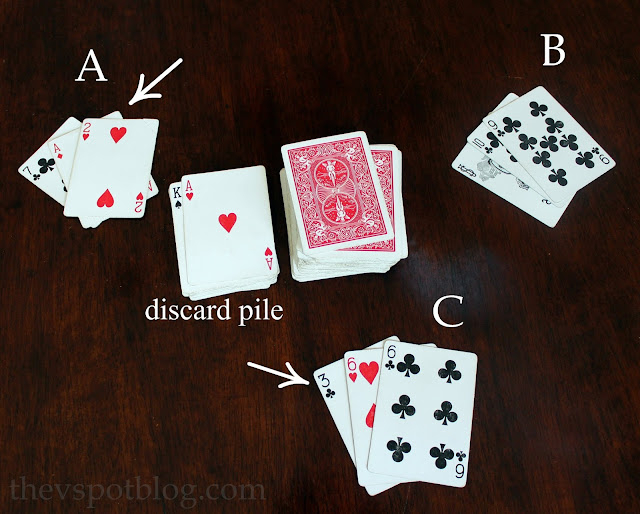 All players were dealt 3 cards.  Let’s say that Player B was the first one to “Tic”.  They had a run of 3 in a row a 9 of clubs, a 10 of clubs and a wild card.  Once someone “Tics” every other player gets one last chance to either pick up the card they need/minimize the number of points thy’ll get stuck with.  In this instance, Player C drew from the pile and fortunately came up with a 3, which is a wild card this round.  They will go out with 0 points against them.  Player A didn’t have 3 of a kind or a run, and had no wild cards, so the best they could do is to discard a high point card.  (Aces count as 15 points against you, face cards are 10 and everything else is number value)

The person who was the first to Tic becomes the dealer in the next round.  This time, each player is dealt 4 cards and 4’s become the wild card.  (The 3 is now just a regular card.) 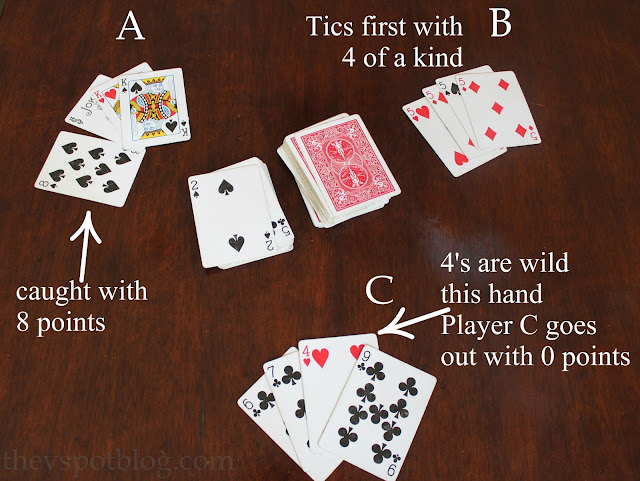 Let’s say that Player B is having a really good game, and they are the first to “Tic” again.  Player C gets one last chance to pull the card they need or minimize the count against them.  In this case, they pull the card they need, so again, they go out with 0 points.  Player A pulls a wild card which allows them to create a set of 3 kings and those cards will not count against them.  They go out with 8 points.

The after the round of 4 cards, the next round is 5’s.  Each player gets 5 cards and 5’s are wild.  (I personally think that 5 is the most difficult round.)  Once you move on to 6 cards, it gets easier because you are able to break things back down into sets of 3. 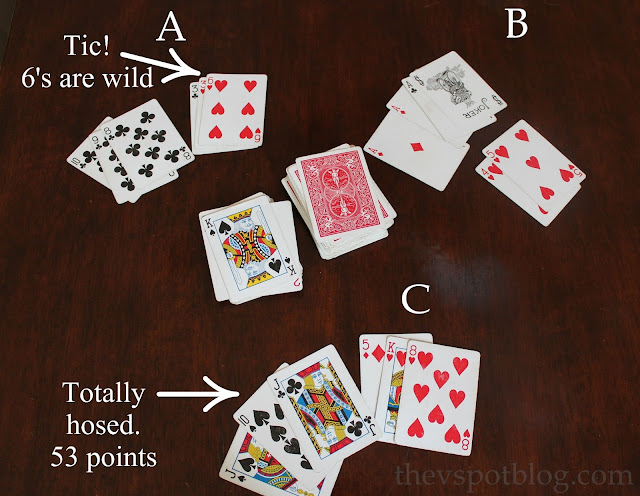 So from here you play a round with 7 cards, then 8 cards, then 9, all the way up to the point you’re trying to hold 13 cards and Kings are wild.

Scoring:
You want the lowest score possible, which is why it’s so important that you don’t get stuck with a lot of points at the end of each round.  In fact, the person who “Tics” in each round actually gets -15 points added to their score.  (I always have HH keep score or use a calculator since adding and subtracting with negative numbers can get me all twisty.  Math?  Me no likey.)

Anyway, Tic is one of our favorite games and we hope you give it a try.  It’s a smidge confusing at first, but once you get the hang of it, it is addicting.

A couple of other games that we love: 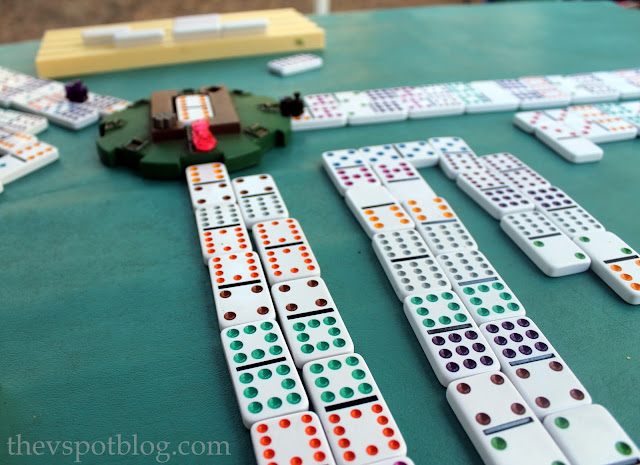 You can purchase Mexican Train at any store that sells toys and games, or on amazon.com 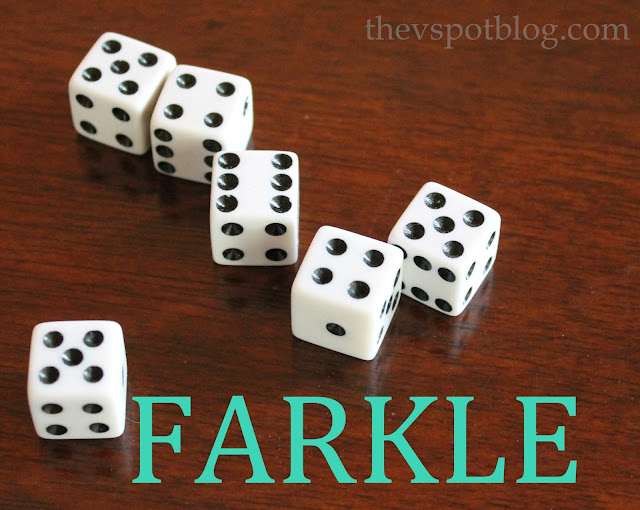 All you need for this one is 6 dice.  We love this one.  Click HERE to get a good general description of the rules.  There are lots of variations on how to play and how to keep score.  It’s quite fun and is a perfect travel game.
Of course we love classics like Scrabble and Yahtzee, but we are also having fun playing games that have been around for a long time, but are new to us: Apples to Apples

.
Updated to add that we have laughed until our stomachs hurt playing Cards Against Humanity (but that is NOT a family game, so we play after the littles have gone to bed.)  We also found a lighter weight Cornhole set  on Amazon (so it is not affecting our weight in the trailer too much.) There are tons to choose from.  Super fun!
What are your favorite vacation games?

Disclosure: I am an amazon.com affiliate My “go-to” recipes for cooking outside (bonfires, tailgating, camping, etc.) Loaded Skillet Cornbread (for the campfire or the grill)

Fresh caught fish? An easy way to cook it up over the campfire. A handy tip to keep your dog from spilling water and food. (Especially great for camping.)

Basic emergency supplies you should keep in your car.