He acts first and then asks questions later.

He forgets his stuff all the time.

He doesn’t use his head in social situations.

He just plain ‘ole doesn’t use his head sometimes….

Yesterday we went to the beach. It’s the first week of summer vacation. We are still experiencing the Southern California morning cloud cover known as June Gloom, so we didn’t get to the beach until about 3:30. (And it was still freezing because of the gale-force winds whipping in off the water…)

Scott, a good childhood friend of ours, is visiting from Colorado with his two kids. We were to meet them at the beach and then they would come back to our place and we’d BBQ some burgers and hang out. We live about 15 minutes from Bolsa Chica, so the plan was to be back home by 6:00 or so. That’s a good 2 or 3 hours of beach time.

Devin brought his best buddy, Michael, and all the kids hit the waves for a little while. (Except for Grant, who was content to pretend to hit the waves….) 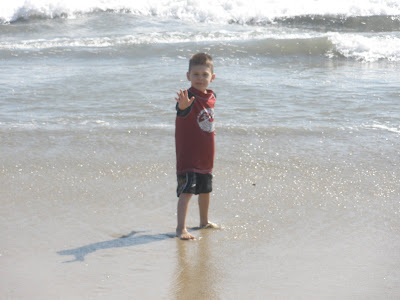 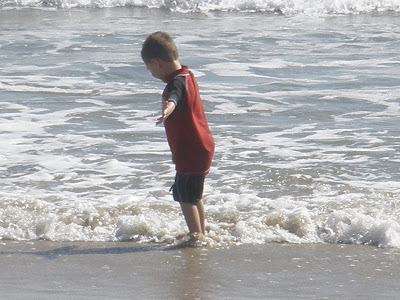 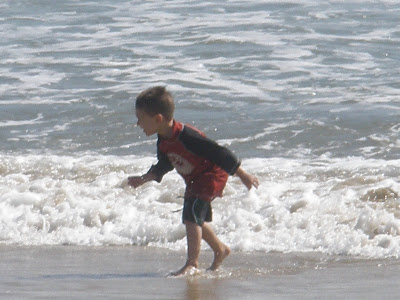 After about half an hour, Devin and Michael came out of the water.
“Mom, Michael has $10 and we want to go over and get some ice cream.”

I chuckle and make a reference to money burning holes in pockets. I grant them permission to go get ice cream. I automatically assume that they will be going to get it at the snack bar that is 50 yards from where we are sitting.

Scott and I watch the rest of the kids play at the water’s edge, build sand castles, etc. We visit for a while and start discussing the “pack up and leave” time. We realize that Devin and Michael have been gone about 45 minutes. I look back towards the snack bar. I can’t see them. hmm. Strange.

At about 5:15 I try calling Michael’s cell phone. Voicemail. I assume they are just hanging out, and are probably sitting on the far side of the snack bar so that they are out of the wind.

By 5:30 I am a bit irritated because it’s time to pack up. I gather up some things and head for the car. Grant is wet, sandy and shivering. The foolish child’s lips are practically blue and although he says he doesn’t want to leave, I know he’ll appreciate being in the warm car, out of the wind.

I get him squared away and I walk over to the snack bar, to find my wayward Banana Splits and to send them back for the rest of our stuff. They are not there, and being as it is after 5:00, the snack bar is closing. I stand on the walking path and look up and down, trying to spot them.

Perhaps they had gone to one of the other snack bars?
Perhaps they didn’t pay attention to which lifeguard tower we were sitting by? (I mean, why would they start paying attention to their surroundings now…?)
Are they lost?

It’s almost 6:00…. the time we should be back at our house, firing up the BBQ.
I call Handsome Hubby and let him know what’s happening. He snorts and says, “Those dorks. They’re lost.” Since more friends are going to be joining us for dinner, he heads home so that someone will be there when our guests arrive. (“Come have dinner with us! Psych! Not really!”)

Everything is off the beach and packed into the car. I have discovered that in addition to having left their shoes behind, the boys have also left Michael’s phone, so my “where are you!?” messages have not been retrieved. I ask Scott to stay put while I drive up and down the beach access road and look for them.

The beach access road is dotted with little parking lots. One of the things I love about Bolsa Chica is that the water is about 50 yards from the parking lot. I do not like having to search for street parking and lug chairs, towels, coolers, boards and kids along a street and then down a mile of sand. So I was able to drive the road, and turn into the parking lots, and be able to see both the bike/walking path and the water’s edge. Of course, I drove the whole length of the beach and was not able to see my missing Eskimo Pies.

Another call to Handsome Hubby at 6:30.
Nope, we haven’t found them.
Yep, my sanity is hanging by a very thin thread.
Nope, I can’t take a Xanax because I will need to stay awake.
Yes, they have now been missing more than 2 hours.

The next step: We flag down a lifeguard driving on the beach in his truck.

The lifeguard calls it in. The guards in their towers and the ones on patrol in their jeeps have the boys’ descriptions and are actively looking for these two dorks.

The Beach Police are now involved as well.

I had gone from irritated, to frustrated and was heading towards that neighborhood called “Worry.”
Had it been Grant that was missing, or even Conner or Mitch, I would have been in a complete, blind panic. I would have been worried not just that they were lost, but that maybe someone had kidnapped them, or they had somehow gotten back out to the water without me seeing, or somehow had scaled the fence at the beach access road and gotten out onto PCH…. But these are 2 big, almost adult (pfft) young men. What. The. Hell?

Handsome Hubby calls and tells me he is driving over to wait for the boys and is going to be sending me home (Remember, I am supposed to keep stress to a minimum so I don’t have another of these Vaso Vagel Snycope episodes…)

The lifeguard came back in his truck and said they hadn’t found them. Would I drive up and down the beach with him to help look? Of course.

Jerry, the sweet lifeguard, was asking questions about the boys as we drove.
What kind of students are they?
Honor roll!
Would they decide to just screw with me and hop on a bus and ride up to Long Beach or anything like that?
No! Never!
Would they meet up with friends and leave and not tell me?
No! They would come and ask me first if they wanted to leave with other people.

As we drive around, I confide to Jerry that I am now, officially, starting to freak. The boys have been gone almost 3 hours. The sun is starting to set. I am going to sell my house in Worryville and buy a new one in Panic Town…

I tell him that in a few minutes I am going to have to call Michael’s parents and tell them that I can’t exactly find their son. (And, by the way, after all of this will they still be willing to let us take him up to Lake Tahoe to go camping next month…?)

We drive from one end of the beach to another, weaving through seagulls and the few remaining beach goers. The day people are leaving and the night-time people are setting up their campfires.

Finally, the call comes over the radio: “Station 20? Yeah, spotted your missing boys. They’re walking over the bridge at PCH.”

Jerry the Lifeguard and I breathe a collective sigh of relief, as we had just been discussing that it was probably time to involve The Huntington Beach Police Department. Then we realize that they had left the beach all together.

As we drive back towards my car, Jerry asks me if I would like him to put an oxygen mask on me, for dramatic effect. I tell him thanks, but it won’t be necessary as I am more than capable of producing plenty of my own, prop-free drama.

I thank him profusely and he drives away, shaking his head and laughing.

I mentally spit on my hands and summon Screechy Mommy. (To be honest, she wasn’t that hard to find.)

It turns out that these 2 Dipshits (and I say this lovingly) decided that they would try to find the ice cream shop that Michael once visited with his dad after a bike ride at the beach. This ice cream shop? On the Huntington Beach Pier, more than 3 and a half miles from where we were. 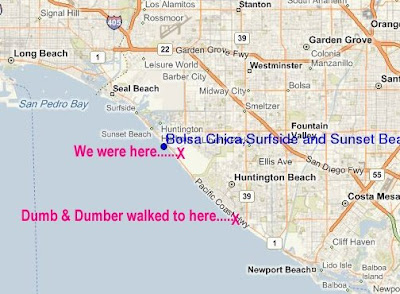 In 3 hours, they walked/ran more than 7 miles, barefoot, to get ice cream.

Didn’t you realize how long you’d been gone!!??!!
Yes, but by the time we realized how long we’d been gone, if we had turned around, we would have wasted how far we’d already come…..

Since you didn’t bother to take a phone, why didn’t you ask someone to borrow their phone so you could call your mother!!??!!
We didn’t think of that.

Why didn’t you use a pay phone!!??!!
We only had enough money for ice cream.

I hope they remember where that place is, because if they are willing to risk blistered feet and the Wrath Of Screechy Mommy in order to get some of that ice cream, then I want some too.

Gallery image with caption: Love, loss, and how my boys taught me about grace & forgiveness.